skip to main | skip to sidebar

Jason Markow posted a great article last week on Social Media Today about the new Facebook group feature. This contains a short video explanation and (not 9, not 11, but) 10 tips on using the feature effectively. I am going to give this a shot.

Come get me, Mother. I'm through.
Posted by My Name's Not George at 9:23 PM No comments:

Come get me, Mother. I'm through.

http://socialmediatoday.com/drewhawkins/157548/what-if-facebook-youtube-and-skype-advertised-1960s
Posted by My Name's Not George at 6:05 PM No comments:

LinkedIn is OnBoard with PeerReview

One more flashback to earlier post The Metrics Can Change the Message, Too. Looking at the new features rolled out by LinkedIn, they get it, too: peer reviews make great metrics.
Check it out at http://learn.linkedin.com/groups/.
Come get me, Mother. I'm through.
Posted by My Name's Not George at 5:59 PM No comments:

Come get me, Mother. I'm through.
Posted by My Name's Not George at 7:29 PM No comments:

The Metrics Can Change the Message, Too

Somebody once said (I'm thinkin' it was Zig Ziglar):

I had the opportunity to meet a corporate social media manager recently and it was really enlightening to hear him speak. He is one who understands the ethos of the social citizen as well as the goals of his employer and he moved from conversation concerning one of those to that of the other seamlessly. This guy really seemed to be cut out for this type of work and is loving it. But he said one thing in particular that struck me and later, it occurred to me that he was rephrasing Zig's (alleged) comment and applying it to his trade. He was speaking of his corporate online community's top contributors as people who churn out a lot of volume (recipes, for example ... and he didn't work for Betty Crocker) just to maintain their top status. He said he realized that he was getting just what he was "asking" for (or "inspecting") because in evaluating the coveted top contributor spot, he solely inspected volume of posts, giving no regard to quality. So he decided to approach his social media vendor and ask for a new feature that would allow the community to evaluate how helpful a post was (see Facebook's "like" and Amazon's "stars"). Then the top contributor would instead reflect the top peer review rating.

You change your metric, you change your content. And suddenly "top contributor" status organically aligns with the business. Sure, people will still "like" a good recipe for banana puddin' (note to Wes: "It's got bananas an vanilla wafers an' puddin' ..."), but those turning to the community for job support will be registering their "likes" as well. Smart move.
Come get me, Mother. I'm through.
Posted by My Name's Not George at 10:00 PM No comments:

The Medium Can Change the Message

When this technology first came out, I used to drive down the interstate and wonder:


"Who in his right mind would ever go to the expense of an LED billboard when a good old-fashioned paper-based one get the message across?"

I immediately understood the upsides – reduced labor costs for changing ads and ... um, well, it's real bright – but I also immediately understood the downside of the expense of one of these units. Not only that, but every time I would drive by one, I could hear my mother's voice: "Chris, don't leave the TV out in the rain." (the guy who developed this must have been an orphan)

Then recently, I began to notice that the nature of billboard advertising has changed. Local concert venues are paying for ads on LEDs for upcoming events in the near term. Companies I had never seen advertise on traditional BBs are utilizing this medium. Why? For near term events, it is now possible to structure a contract based on your time constraints: I'll take out an LED ad 2 weeks prior to an event IF ticket sales are sluggish (and I will be able to stop the ad the day after the event). Why #2? For smaller clients, it is now possible to structure a contract based on your budget constraints. I may not be able to afford ad space on I-75 24/7 for a month, but I can figure out a way to afford a 10 second spot 6 times an hour from midnight to 5:00 a.m. (especially if my target audience is out cruising at that hour).

In short, the medium has changed the message. When faced with a new medium, it often takes a while to get one's head around the WIIFM*. But eventually, I may catch up with the new medium, I'll "get it," and then I'll get on (bill)board. And THEN, I'll "get it" again and I'll adapt my message to the medium and THEN I'll really be humming. That is what has happened in the billboard industry and I predict that the brain trust of America – the advertising community – will continue to think outside the billboard and come up with increasingly innovative and affordable messaging ideas for this truly remarkable medium.

It's kind of like having a series of well-worn footpaths – dirt lanes parting the grasses to allow passage for the masses ... man, I should have been in advertising – then discovering this incredible breakthrough called concrete and going to the task of paving all of your existing footpaths. This can definitely be a good thing: fewer muddy sneakers upon arrival, for one. But if I just continue to pave footpaths, I will miss the real upside to the innovation of concrete, which is building pedsetrian structures that were never before possible: bridges, overpasses, wheelchair ramps. When I begin to innovate, then the medium will truly begin to change the message. 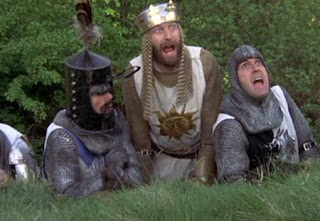 Oh gee, look! The blog title sez this is supposed to be about learning communities! So here is the twist (drama) and the tie (advertising): The platform of a learning community can just be a new place to move our learning messages. OR, if I really begin to innovate within the new medium, I can change the message. Learning can be impacted and catapulted forward ("Run away! Run away!") in a way never before possible with traditional ILT and WBT delivery methods. I am just beginning to get my head around this, but I think it bodes well for the future of learning.
By the way, here is an interesting read on the history of the billboard and the emergence of LED.
Come get me, Mother. I'm through.
_____________________________
* What's In It For Me
Posted by My Name's Not George at 3:12 AM No comments:

This links to a Bloomfire interview with Dr. Allen Partridge, eLearning Evangelist at Adobe (man, now that would be a cool business card to hand out, wouldn't it?). He had some interesting things to say about the road ahead with learning communities. In particular, his questions about how to assess learning 2.0 skills are thought-provoking. If communities of practice are to become more central to workers' job requirements, then how will we identify the contributions of the individual in order to assess, reward, correct, etc.?
The nature of free enterprise is that we reach tomorrow's achievements by posing and discussing really good questions today. So for now, Partridge is doing the right thing by asking the right questions.
Come get me, Mother. I'm through.
Posted by My Name's Not George at 5:46 AM No comments:

My Name's Not George